You are here:Home-Publication-The Afghan Government Can’t Make Peace With the Taliban on Its Own

Negotiations involving a broad group that represents all of Afghanistan—not just its senior politicians—are the only way to achieve a lasting settlement. 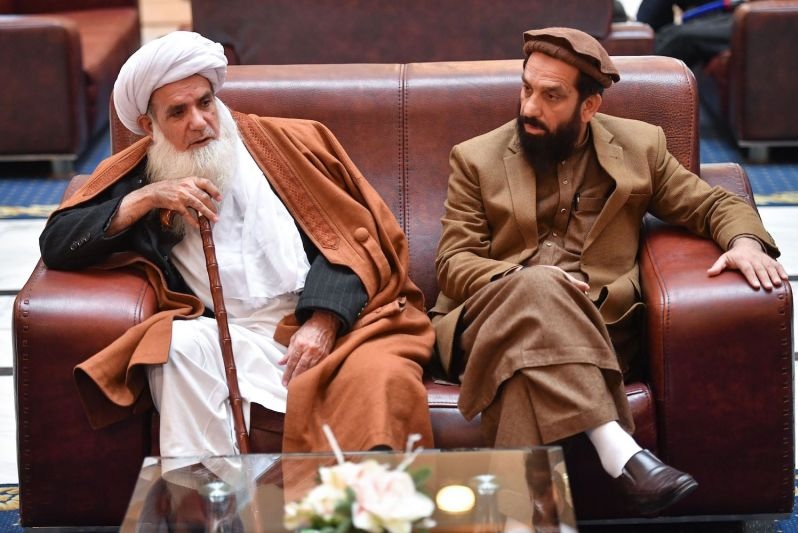 Participants arrive to attend a two-day gathering of the Taliban and Afghan opposition representatives at the President Hotel in Moscow on Feb. 5.  (YURI KADOBNOV/AFP/GETTY IMAGES)

For most Afghans, the day when their country is free of any foreign troops will be a day to celebrate. More important is winning a dignified peace. The two aims are intricately linked, and their realization seems closer than it has been for years. The U.S. government’s announced intention to withdraw its troops from Afghanistan, and hold direct talks with the Taliban, has created significant momentum. Meanwhile, an intra-Afghan dialogue has started between a number of Afghan politicians and the Taliban. The two tracks, U.S.-Taliban and Afghan-Afghan, complement one another. However, neither can truly succeed without including representatives of all Afghans and the Afghan government.

The government of President Ashraf Ghani has alienated and sidelined the overwhelming majority of senior Afghan politicians because it has not included them in major policy making decisions and has failed to improve security and economic conditions in the country. Indeed, security conditions have worsened, with more than 45,000 security personnel killed since Ghani came into office.

I attended the intra-Afghan talks in Moscow in February. (Several Afghan government officials attended the meeting in their personal capacity, too.) The decision to attend the meeting was not an easy one. Criticism was leveled from the government and segments of the civil society, including women and some young people, at the concept of the meeting, particularly in the absence of government. However, on balance, the Moscow talks represented a stepping stone in the long journey toward peace.

The opportunity to sit face to face with the Taliban, and to work toward a shared future, should not be missed.

Discussions like this are not new, but they have never been held at this level. The joint statement issued at the end of the talks set important principles, including respecting the institutions of the country and securing the rights of all Afghan citizens—women and men alike. The agreement on the withdrawal of foreign troops also confirms that the Taliban do not have a monopoly on the issue of troop withdrawal. However, serious issues remain, which will be discussed in the upcoming meeting scheduled for mid-April in Qatar among Afghan politicians, tribal elders, representatives of women and young people, and the Taliban.

The politicians and the key actors involved in the intra-Afghan dialogue must be cautious and avoid turning the peace talks into a political zero-sum game for themselves. The Afghan people need to see results in their daily lives and have a stake in maintaining the gains of the past 18 years.

Difficult decisions, including on the future of the Afghan Constitution and the role of Taliban leaders, in addition to guarantees over protecting civil rights, will be required for a political settlement.

On the other hand, the Taliban have shown no desire to talk or negotiate with the current Afghan government, which they view as illegitimate. Their argument is that they control more than 50 percent of the country’s territory, which they say entitles them to be the center of power, inviting all other actors to join them. They feel their recent engagement with the United States and other international actors has also given them political momentum. Washington’s signals of a possible troop withdrawal has further boosted their morale and confidence. While the Taliban have publicly said they don’t seek to consolidate power, they would ideally want people to join them in forming the next government through a political settlement.

That was evident at the Moscow meeting, where approximately 50 prominent Afghan elites met with 15 members of the Taliban, giving them further political legitimacy. Having not only senior Americans but also some of the most prominent Afghan politicians sitting at the table with senior Taliban members gave the movement an air of official authority.

The third scenario, and the one that has the best chance of succeeding, is to have the government and a representative of the Afghan political leadership, and even the opposition to Ghani, form one united front to negotiate with the Taliban and to work on a road map toward peace. This front has to represent not just the government but civil society, youth, and most importantly women.

No party will get everything it wants, so a middle ground must be found.

This would set the stage for a true national dialogue that would lead to a political settlement with the Taliban. This practical process will allow all Afghans to come together in a unified front and then negotiate with the Taliban.

This is a route out of the current impasse. It would also complement what the United States is currently seeking, rather than competing with it, since there are many issues that the Taliban will only discuss with Afghans. For the U.S. track to succeed, the intra-Afghan dialogue must gain momentum and wider legitimacy. If the U.S. talks make progress without an Afghan internal agreement, then either the U.S.-Taliban deal will stagnate and possibly fail or the withdrawal of U.S. troops will be seen as a defeat and the handing over of Afghanistan to the Taliban. The U.S. talks with the Taliban can also be used as leverage to encourage the latter to make concessions on important issues including the reduction of violence for the intra-Afghan talks. The United States can insist on certain steps that the Taliban must deliver on. That opportunity should not be squandered.

About the Author: Admin